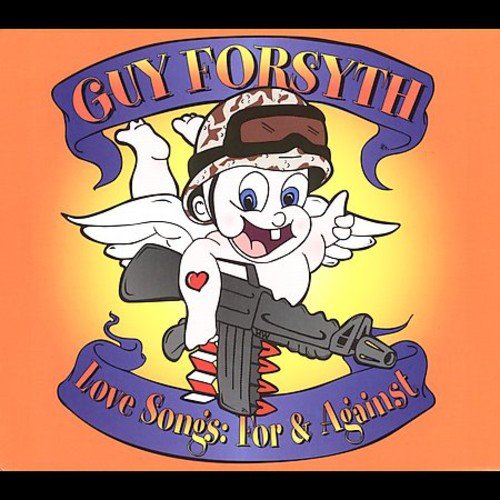 Guy Forsyth grew up in KC but has been a denizen of Austin, TX for the past couple of decades. He's a true renaissance man musically, and is very difficult to pigeon-hole. He was a co-founder of the Asylum Street Spankers, has released adrenaline-fueled rock 'n' roll records, and is probably best classified as a singer-songwriter with very deep rootsy/bluesy musical roots. Guy's music is eclectic - in the best sense of the word. He's also a multi-instrumentalist, being a fantastic slide guitar and harmonica player, and also playing guitar, baritone guitar, ukulele, and saw (yes, musical saw.) There are messages in the lyrics of most of Guy's songs, or if not outright messages, then deeper meanings of life as he sees it playing out around him.

Dubbed "an American roots musician of the highest order" by Texas Music Magazine, Guy Forsyth is something of a musical shaman. As a singer songwriter, guitarist, harmonica player and band leader as well as actor, martial arts devotee and mster of the rare art of playing the musical saw, his goal whenever he steps on stage or into a recording studio is to create magic. Over the past twelve years, Guy has made quite a name for himself in Texas and abroad. Guy is a founding member of the Asylum Street Spankers, has toured Europe annually and along with his recorded work with The Spankers, has released four solo albums.

To All A Good Night Santa Fabric Panel

WE HAVE A GREAT RANGE OF DISNEY FABRIC
FROM ONLY £9.99 PER SQ METRE

KEEP WARM WITH OUR RANGE OF FLEECE MATERIAL
FROM £5.50 PER SQ METRE

We are a family run fabric shop in the wonderful spa town of Harrogate, We have been here for over 50 years supplying fabric to the people of Yorkshire, our fabric experience spans two generations giving us a great understanding of fabrics and haberdashery.

We started sending fabric by mail order over 25 years ago and still send out our little catalogue, but 10 years ago we found a little area on the world wide web and The Remnant House Fabric online was live, since then the website has grown and we offer all types of fabric, dress fabric, quilting fabric, furnishing fabric and much more.

Our stock changes regularly so if you don’t find what you would like please contact us or sign up to our newsletter which will keep you informed of our new products.

We use cookies to ensure that we give you the best experience on our website. If you continue to use this site we will assume that you are happy with it.Yes, I Accept